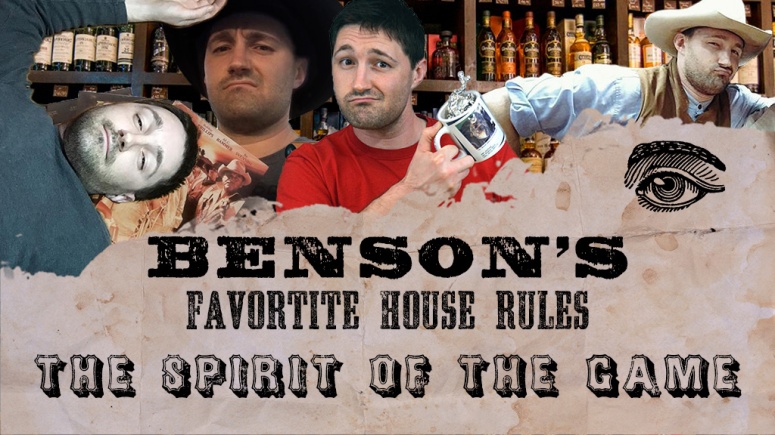 Hey there! I’m Benson, and I’m one of the principle designers of the Exiles game, if for some reason you didn’t already know that.

Exiles is a tight little minis game, but it’s also an RPG, and that means all kinds of weird shit can (and should) happen that falls a little bit outside of the ‘official’ rules.

In this series I’m going to introduce you to all of the little house rules I like to use in my Exiles games. Some will give you handy ways to deal with things that fall outside of the official rules, and others are just for fun!

I thought I’d start us off with my very favorite house rule: The Spirit of the Game.

No, it’s not some hippy-dippy bullshit about not being a dick. That shit goes without saying.

This is how it works:

Anyone can take a shot of hard liquor to get an extra re-roll on top of a Cheatin’ re-roll, but this really is the LAST re-roll!

In other words, the ‘spirit of the game’ is literally the distilled spirit you should always have on hand during a game!

FIRST, drink responsibly and stuff. We tend to use a ‘designated drinker’ rule that lets some slovenly inebriate imbibe the spirit of the rules on behalf of a responsible driver.

Second, this house rule tends to make Characters pretty hard to kill, if you just go by the math. However, in practice I find that the increased odds of success are more than counterbalanced by inebriated decision-making.

Finally, the saloon doors swing both ways, and the GOVERNOR can imbibe the spirit of the rules on behalf of the Bad Guys. Although due to the number of Bad Guy models on the table, it’s usually a good idea if the Governor is also the host, so he (uhhh… me) can pass out in a giant mess without pissing anyone off.