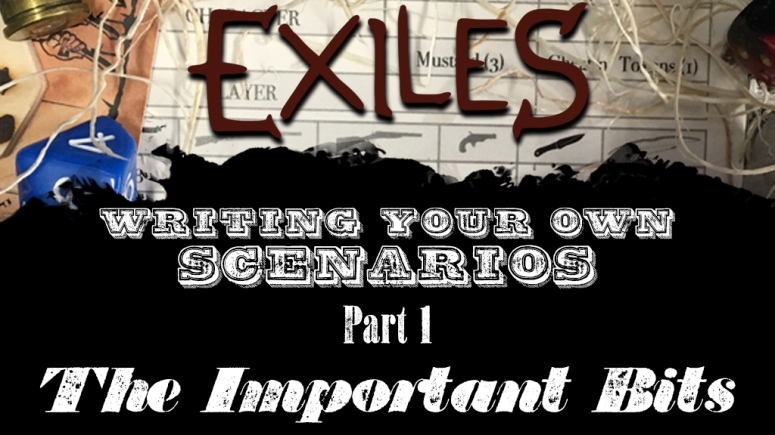 I know a lot of you are full of great ideas and awesome stories that you’d love to turn into Scenarios for your Exiles campaign.

One of the things I love best about Exiles is how easy it is to bring your own home-brew Scenarios into an ongoing campaign.

In this series we’re going to walk you through how we design the Exiles Scenarios you know and love. We’ll also show you a bunch of tips and tricks that will help bring your own Scenarios from totally awesome to completely badass!

Before we get too deep into this shit we should take a quick look at all the different parts of an Exiles Scenario.

First up is the title. Every Scenario needs a title, and we’ll talk all about how you shouldn’t cut corners when it comes to titles.

After the title comes the summary. This is a short one or two sentence description of what’s going on in the Scenario. The summary gives the Governor an idea about how to interpret all of the other bullshit in the Scenario.

Now we get to the meat of the Scenario, the Events.

Every Scenario is made up of at least two Events, sometimes more. Each event is a complete Exiles game in which the Characters have a discrete objective to achieve. The important thing to remember here is that Events should have a very simple objective. If you want to do something complicated, break it down into simple goals and make each goal a different Event.

Every Event has a title, of course, and don’t skimp on titles.

Events break down into four main parts: Before We Start, While We Play, It’s Over Now, and Betterments.

Before We Start is how you set up the table. This includes your table diagram and where you put all the most important shit like Characters, Bad Guys, and any other important bullshit.

While We Play is where you do all of your Special Rules for the Event, and it’s also where you say how new Bad Guys get put on the table, which is super important.

Lots of people might think that Special Rules are the most important part of an Event, but it’s actually the Betterments. Betterments are the optional objectives that the Governor should be trying to get during the game.

It’s Over Now tells you when the game is over, and this is what the players will probably focus on most. It’s Over Now is also where you decide how much Loot the Characters should get, hence the focus.

And that’s it! All of those parts combine to create a Scenario.

You need to approach each part of a Scenario a little bit differently, but you should never forget that each element is part of one cohesive whole. Everything needs to work together if you want your Scenario to be completely badass!