Now, that’s an interesting question, friend. Naw, I don’t rightly know how Devil’s Perch come to get the name. And I ought to knowed ‘cause I been in these parts since goddamn creation!

Yessir, I prolly been here the damn longest outta anybody around, except maybe ol’ Mr. Cole…excuse me, Governor Cole, Governor Montgomery Cole, to be exact. Ya see, this whole place used to be a penal logging camp for the Territorial Government, which was owned by Montgomery Cole at the time, lock, stock, and barrel. The gov’ment, that is. All this used to be Federal land till Montgomery bought it up and made it over into an organized territory. But that’s another story. 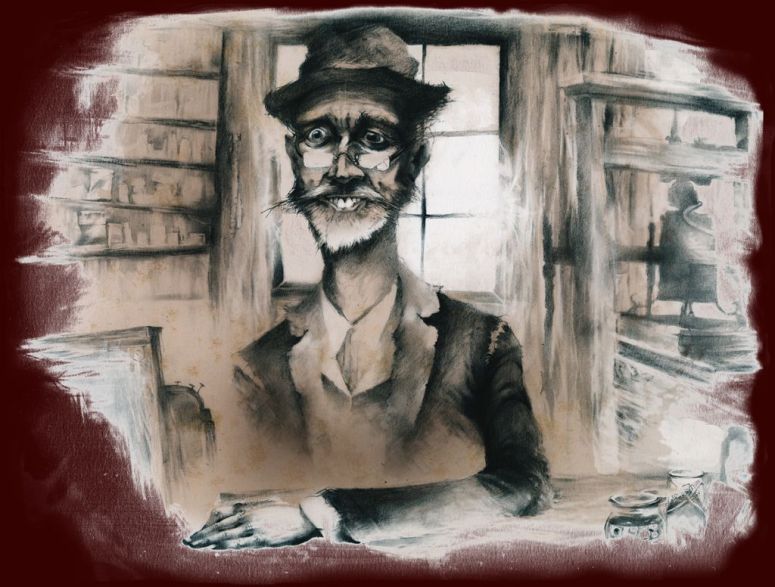 What was I sayin’? Oh, yea, that’s right. Cole, Montgomery Cole that is, hired me in my shirtsleeves to run the camp’s provisions. There weren’t much out here back then ‘sides tents and daub cabins. You see where that feller yonder is havin’ his way with a lady? No, no, the other one. He’s fuckin’ right on the spot where the prisoners used to line up fer their whiskey ration.

It was rough livin’ then, and you can be damn sure ’bout that.  Weren’t so nice as it is now, what with the gold and the railroad and all. Weren’t a woman for fifty miles neither!

Anyway, the Gov’nor weren’t makin’ much money off the camp, even with all the boys workin’ real cheap, as it were. Wasn’t too many folks about as needed lumber, and it all had to be took out by freight. It were ‘bout a year on when the Gov’nor’s cousin, Payton, come out west lookin’ fer a bill o’ goods. Monty figured he’d get shed o’ the aggravation and sold Payton a contract to run the camp for the gov’ment.

Mr. Payton was good enough to keep me on to run the company store. It was simple enough work ’cause everythin’ were done with vouchers back then. The men got paid in vouchers, and I sold eveythin’ on vouchers too, so it were real easy to keep accounts squared up. We only had so many o’ them paper vouchers, you know, and they went ‘round and ‘round and back again, sometimes more’n once a day. I remember there was one o’ them vouchers with a picture of a cock drawed on. There was one time that lil’ cock voucher was good for a plug o’ tobacco, a pot o’ hot coffee, and a dram o’ whiskey, all ‘fore supper time!

But listen to me jawin’ on… Come on back later and I’ll tells you what happened when Payton bought the whole place and in…incor…incorp’ated, as it were. They turned out all the prisoners at the time, and I remember Mr. Devereux had to hang a few fellers…maybe that’s where the name come from.