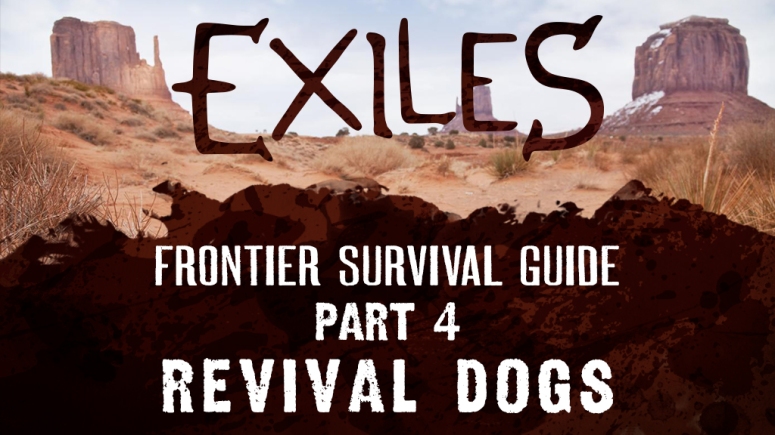 Exiles may seem like a simple little minis game, but beneath its carefree, slapdash exterior is a deeply strategic skirmish game that can be a merciless bitch if you aren’t prepared!

One problem that you will inevitably face on the frontier is when everybody in your posse with the Revival skill is Bleedin’ Out. And before you ask, if you’ve got the Surgeon skill, you almost certainly also have Revival, so you’re Bleedin’ Out too.

When it comes to staying alive, learning how to manage this dire situation is absolutely critical. Obviously, Revival is the main way to keep Bleedin’ Out dudes from dying, which they will do inside 6 game turns.

Your first instinct might be to ask if there’s any items that allow you to heal without either the Revival or Surgeon skills. The answer is “Yes,” but pull your head out of your ass. Those items are rare, expensive, and often weird to use. You cannot rely on them!

When everybody with Revival is Bleedin’ Out, your first and only goal should be to end the game!

That’s right, END THE GAME! There is a (deliberately created) quirk in the Exiles rules that gets rid of effects as soon as the game is over. You are only DEAD if the Bleedin’ Out effect COUNTS DOWN to 0. If the game ends before that happens, you live to fight another day.

So, END THE GAME AS SOON AS POSSIBLE! If that means running away, do it! If that means killing the boss, fuck his ass up with extreme prejudice! If that means failing to achieve an important objective, fuck it! Survival is all that matters now.

Of course, there are rules that keep effects going after the game is over, most notably the Quick Turnaround rule. If that’s the situation you’re in, kiss your buddies goodbye and save your own skin! At the end of the day, YOUR survival is all that matters!

You can make new friends.