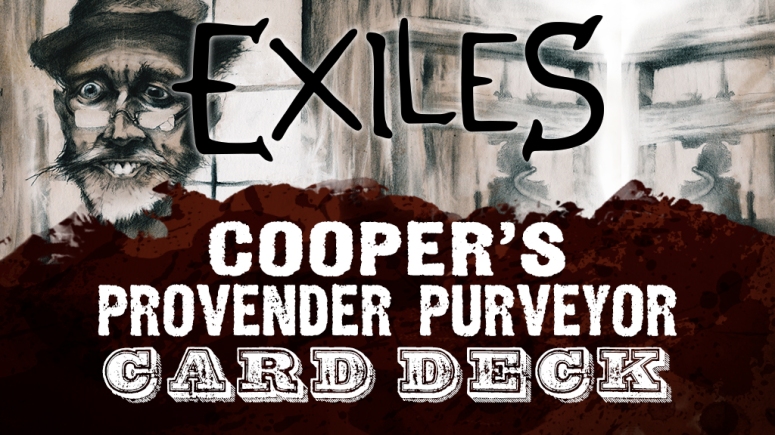 “Howdy, friend! Welcome to Cooper’s Provender Purveyor, the first and best general store in Devil’s Perch. I’m Jamie Cooper, proprietor of this here establishment. I got everything you’ll need out here on the frontier, from cordwood to commodes! I’ve got dry goods, tools, a fine selection of firearms, and all manner of useful sundries. If you need something I ain’t got, just point it out in Messrs Sawborn and Keater’s catalog and I’ll have it for you in a month or two!”

Is your posse fighting over who gets the only Patterson Cattleman? Is your Gunslinger buddy refusing to let you buy that bitchin’ shotgun what came in his Persona Pack? Are you sick and tired of only having TWO Shrapnel Bombs?

Well then the Cooper’s Provender Purveyor deck is for you!

The deck comes with repeats of your favorite, most useful Exiles gear, including:

2 copies of every Box of Ammo

But that’s not all!

In addition to a bunch of useful shit you’ve already seen, Cooper’s Provender Purveyor comes with 8 brand new Exiles cards, only available in this set, including Jamie Cooper as a playable Character!

Jamie Cooper may not pack much of a punch, but he’s got an amazing ability to prattle on about absolutely nothing, and a profitable dry goods store at that! His disarming affability and fat billfold make him a damn good friend to have around.

You’ll also get three ass-kicking new weapons including the Savage Revolver, the Signal Gun, and the Silver Tea Tray. The Savage Revolver may look weird, but it’s a mean little pistol in the hands of an experienced Gunslinger. The Signal Gun isn’t really supposed to be used as a weapon, but fuck it, set that asshole on fire! And the Silver Tea Tray may be an attractive antique, but it’ll save your ass in a pinch! 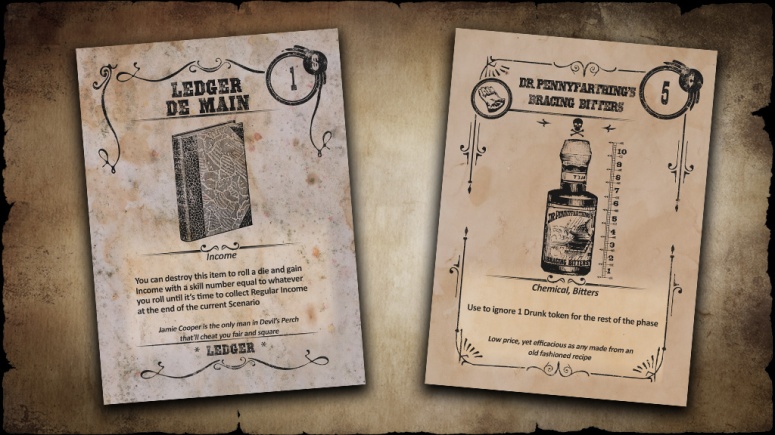 The Ledger De Main represents how business gets done over at the Purveyor. As Mr. Devereaux says, “Jamie is the only man in Devil’s Perch who will cheat you fair and square.” And of course no Exiles item deck would be complete without another of Dr. Pennyfarthing’s wondrous concoctions. The Bracing Bitters are just the thing when you want to get your head straight after a bender!

Last, but certainly not least, we have the Canvas Bucket and Cigarillos Rojas. The bucket is just like the ones you got in the Troy Hatcher campaign, but you can stuff this one in your coat pocket for easy access.  You may get shot saying this too loud, but the best tobacco in the West comes from Serape, and Rojas is the brand to beat. These little suckers were smuggled across the border, so don’t flinch at the price. In addition to their smooth flavor and pleasing aroma, a lil’ cherry in your mouth is just the thing to make tossing explosives that much easier!